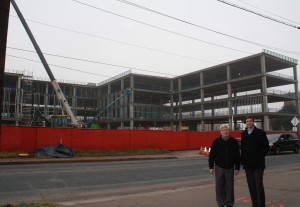 After owning the 45k SF Lamar Village shopping center since 1982, Highland Resources saw an opportunity to capitalize on the location’s walkability at the corner of 38th and North Lamar Boulevard, says Highland VP David Bodenman. The plan: raze the shopping center and build a four-story, 165k SF office and retail development with more than 132k SF of column-free office space with an additional 33k SF of retail and restaurant space. David (left, with investment officer Welden Johnson at the construction site) says the transformation is designed to meet market demand for expanding businesses. 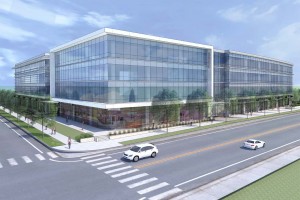 Kendra Scott Design is consolidating its corporate HQ into 44k SF (the entire fourth floor) of Lamar Central. KSD will also lease an additional 1,500 SF on the ground floor to open a flagship Austin retail location (its 37th retail location in the US). David is also seeing interest from out-of-town companies as well as local employers looking to attract young, qualified talent that wants to be in this vibrant neighborhood. And he’s seeing interest from legal, financial and real estate firms with some interest from tech and software firms. This intersection is a proven successful retail corner, David tells us, noting that they’re in discussions with numerous retailers and restaurants. The space is leasing for an Oct. 1 opening. 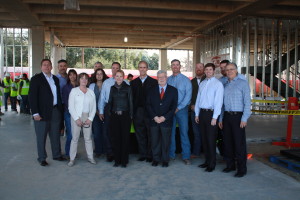 Here’s the gang from the project team (which includes Highland Resources, Rogers-O’Brien Construction, STG Design, Consort, Studio dwg, Chioco Design, American Realty Project Management, BSA LifeStructures, CBRE and Oxford Commercial) at the topping out ceremony a few weeks ago. David tells us Highland is also working on 620 Highland Horizon, a 200-acre residential and commercial project near Round Rock Hospital. It’s already through two stages of single-family residential development and into the next two stages putting down utilities for a large commercial mixed-use development. The project will end up with 600 single-family homes and about 15 or 16 buildings of medical or retail use, he says. The firm also owns and leases the Southwest Tower downtown as well as Oak Hill Shopping Center and other parcels that will continue to be developed.